Chat with us, powered by LiveChat A Guide to Precipitated Withdrawal - Carolina Center for Recovery
Popular Post Recent Posts

What is Precipitated Withdrawal?

Home » Blogs » What is Precipitated Withdrawal? 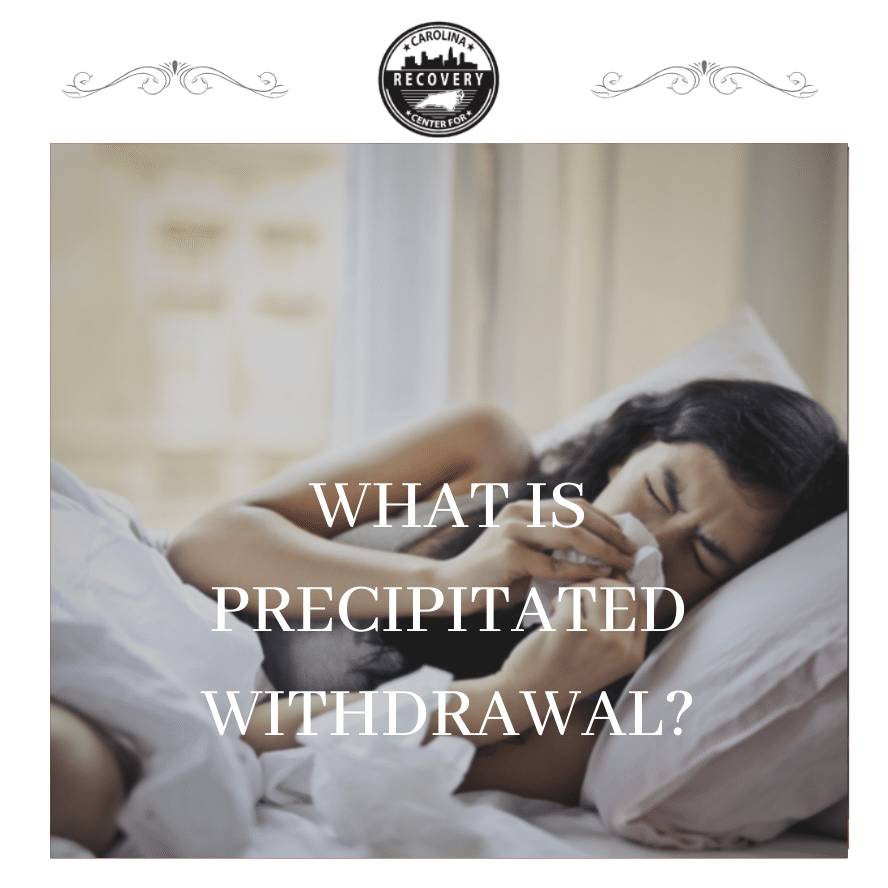 Opioid medications have an incredible ability to relieve severe pain. However, these medications are known to be habit-forming and highly addictive. In fact, in 2017 it was estimated that more than 2 million individuals had an opioid use disorder while 11 million people reported misusing opioids. With that being said, opioid medications are known as highly addictive substances and have begun a national opioid crisis. If you are familiar with opioid addiction, you may have heard of precipitated withdrawal.

Opioids include prescription medications such as oxycodone, Vicodin, and morphine, as well as illegal substances such as heroin.  All of the mentioned drugs belong to the same class and therefore, produce similar effects on the human brain and body. Opioids relieve pain by sending a flood of dopamine, producing a euphoric high that becomes addictive over time. Once an individual begins routinely taking opioids, the brain starts to adapt to having the substance circulating through its neural pathways and throughout the body. Additionally, using opioids frequently will result in the development of tolerance. In other words, individuals will have to take more of the drug in order to produce the desired effect.

Addiction to any substance, such as alcohol or drugs, is a lifelong condition that requires a multidimensional treatment approach. For example, treating addiction requires a combination of behavioral therapy, counseling, and medication management. Opioid addiction is best treated through the use of opioid replacement medication referred to as medically-assisted treatment (MAT). MAT is best suited for helping those in recovery for addiction avoid withdrawal symptoms, decrease cravings, and reduce the risk of relapse. However, misusing these medications may result in a condition known as precipitated withdrawal.

What is Precipitated Withdrawal?

During opioid addiction treatment, individuals may be prescribed opioid replacement medications such as Suboxone, Subutex, and Naltrexone. These medications help individuals transition from opioid addiction to sober living. Subutex and Suboxone are medications made from buprenorphine, a drug that activates the brain’s opioid receptors. Buprenorphine is intended to alleviate withdrawal symptoms while helping patients achieve sobriety from opioid drugs. On the other hand, Naltrexone blocks opioid receptors rather than activating them. This is done in order to reduce opioid drug cravings and allow individuals to focus on their recovery.

Precipitated withdrawal occurs when an individual takes one of the previously mentioned medications without adequately detoxing off of opioids. Taking these medications too early in the recovery process will cause sudden and severe withdrawal symptoms to occur. As a result, individuals will have an increasingly difficult recovery, possibly resulting in a relapse.

Unfortunately, these intense symptoms may cause health problems such as dehydration and electrolyte imbalance, typically requiring hospitalization. In order to avoid this, it is vital to seek treatment from a team of experienced opioid addiction counselors and doctors.

The How and Why of Precipitated Withdrawal