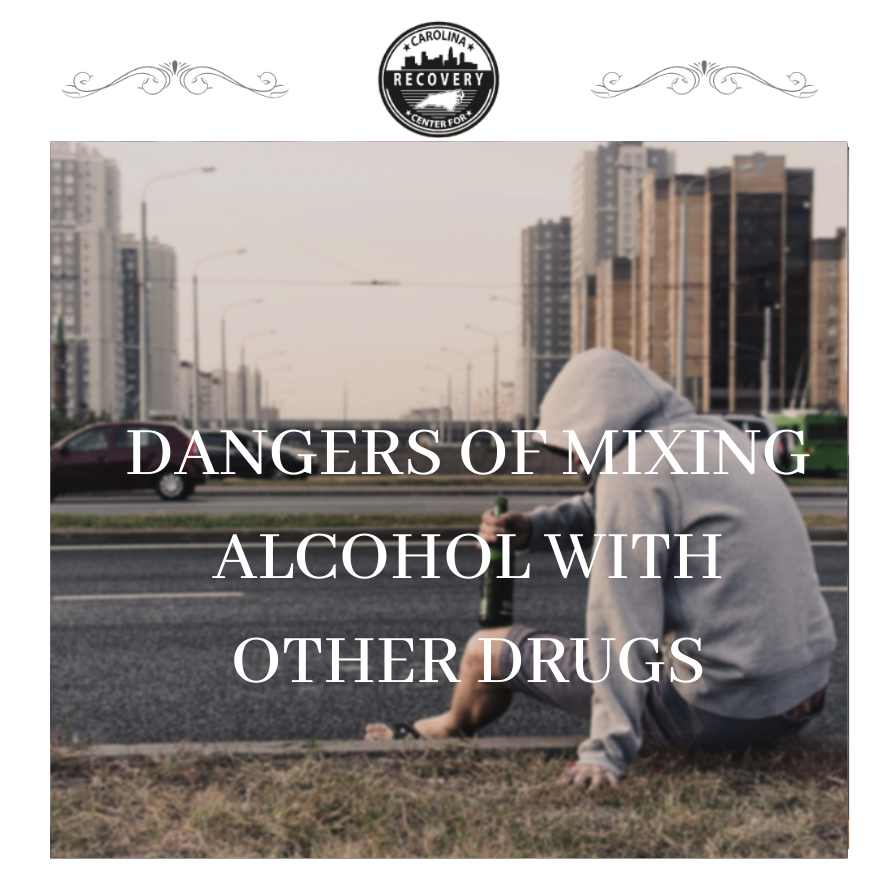 The Dangers of Mixing Alcohol With Other Drugs

Alcohol is the most commonly used substance in America. In fact, 86.4 percent of adult-aged Americans have reported drinking at some point in their lifetime. While only having a couple of drinks is not necessarily harmful, many individuals develop a dependence or addiction to alcohol over time. Even more concerning, it is extremely common for people to mix alcohol with other drugs. However, mixing alcohol with other drugs is dangerous. This causes concern due to alcohol’s probability to react negatively when used in combination with other substances.

Alcohol has the ability to amplify the effects of other medications or substances that an individual consumes. This is problematic when you consider the risks and effects that other drugs cause when used alone. Additionally, alcohol may negate the effects of certain prescription medications that are vital to one’s health. As a result, it is extremely important to avoid mixing alcohol with other drugs in order to protect your health.

Although alcohol use is not recommended while you are ill, many people drink in order to avoid the symptoms of their illness. However, in doing so, you place yourself at risk of experiencing increased side-effects of your antibiotics. In fact, when you mix alcohol with antibiotics you may be at increased risk for serious complications such as liver damage. This is because both alcohol and antibiotics are metabolized in the liver. The combination of both substances can overload an individual’s liver – ultimately damaging its ability to function properly. Also, it is important to keep in mind that many antibiotics can become less effective due to alcohol consumption.

All too often, people mix alcohol with Adderall due to the misconception that combining a depressant with a stimulant will cancel out the effects of each other. In reality, mixing a depressant and stimulant (commonly referred to as “speedballing”) will increase the effects of both substances. While an individual may experience less of the drowsiness associated with alcohol, combining these substances still causes severe adverse reactions in the body. Additionally, people may drink more than their bodies can handle due to the energy that Adderall provides. This may lead to alcohol poisoning along with other life-threatening issues.

Combining alcohol with Adderall can cause severe heart issues, such as:

Mixing cocaine with alcohol has similar effects as combining alcohol with Adderall. Since cocaine is a stimulant, people believe that mixing it with alcohol will cause them to “sober up” enough to be able to drive or function as if they were sober. However, this is a gross misconception that can cause life-threatening effects. In fact, when alcohol and cocaine are combined, they turn into another substance once they enter the body. Cocaethylene is created when someone consumes both cocaine and alcohol. This substance is known to cause the highest level of cardiovascular activity, putting dangerous levels of stress on the heart. As a result, people who mix these substances are susceptible to cardiac arrest, and ultimately, death.

Similar to cocaine and Adderall, methamphetamine is a stimulant. However, the ramifications of mixing meth with alcohol are significantly more serious. When combined, an individual will experience extreme pressure on the heart as well as dangerously high blood pressure. Additionally, both meth and alcohol are known to cause violent behavior. Therefore, when combined, side-effects such as violence can become magnified to dangerous levels. Furthermore, meth is an extremely addictive substance that, like alcohol, requires medical treatment once a person becomes addicted. Lastly, the combination of alcohol and meth is known to cause severe kidney damage.

Mixing alcohol with other drugs like legal or illicit opioids is arguably one of the most dangerous and detrimental combinations possible. When combined, these substances magnify the effects of one another. As a result, people can experience fatal sedation, overdose, and respiratory failure. Additionally, this combination can cause depressed breathing, which can lead to brain damage or death due to a lack of oxygen.

Other known side-effects of combining opioids with alcohol include:

In addition to these side-effects, combining alcohol with opioids of any kind can cause irreversible liver damage. In order to avoid this, do not drink alcohol while you are on opioids.

While many people use alcohol to soothe symptoms of a “bad trip” while on a hallucinogen, this combination is extremely dangerous. Using alcohol with a hallucinogen may lessen the intoxicating effects of alcohol, causing users to drink more. As a result, an individual can easily overdose on alcohol.

Common side effects of mixing alcohol and hallucinogens include:

Treating People Addicted to Mixing Alcohol with Other Drugs

Polydrug use is defined as the act of frequently mixing different substances, often resulting in the addiction or dependence to said substances. As demonstrated above, combining alcohol with other drugs cause severe and life-threatening ramifications. Just like any addiction, polydrug users vitally need to undergo addiction treatment or alcohol rehab. If you or a loved one suffers from the addiction to mixing alcohol with other drugs, treatment is available. Beating addiction alone is difficult and potentially life-threatening. Call us today.

Understanding the Difference Between Addiction and Physical Dependence
February 3, 2020

The Truth About Opiate Detox and Withdrawal
December 1, 2019