Chat with us, powered by LiveChat How Long Marijuana Stays in Your System - Carolina Center for Recovery
Popular Post Recent Posts

How Long Does Marijuana Stay in your System?

Home » Blogs » How Long Does Marijuana Stay in your System? 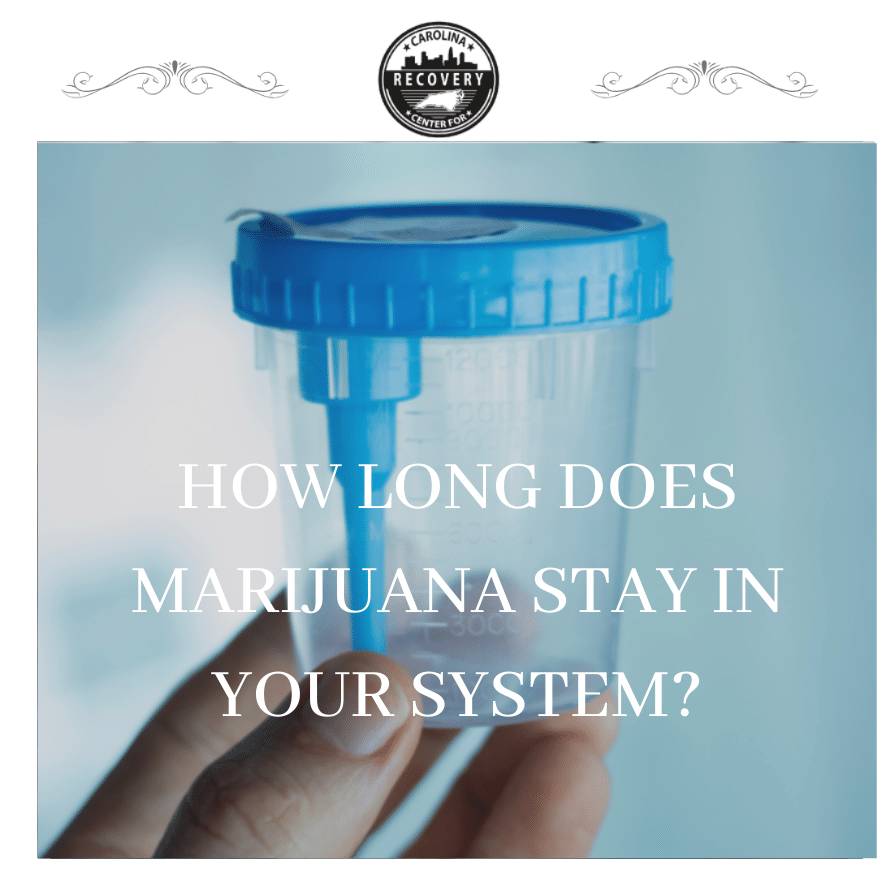 Marijuana, one of the most commonly abused substances in America, is derived from the dried flowers of the cannabis plant. Marijuana is used illicitly, or by prescription in some states. Despite the medicinal uses of marijuana, this substance is frequently used in order to achieve a euphoric feeling that users experience after consumption, also known as the marijuana “high”. This high is caused by tetrahydrocannabinol, the primary chemical in marijuana. While the high caused by marijuana will fade, chemical metabolites referred to as cannabinoids remain in the individual’s body for varying amounts of time. Additionally, the amount of time it takes for cannabinoids to leave an individual’s system varies depending on a number of factors.

How Long is Marijuana Stored in the Body?

Most of the time, THC (marijuana), is detected through a urinalysis drug test. However, the psychoactive chemical can be detected in other areas of the body as well. Additionally, the length of time that marijuana is stored in the body varies by location.

Many employers or drug testing centers test THC levels through a urine examination. According to research, marijuana is detectable in the urine after last use anywhere from two days (first-time users) to two months (chronic users).

Marijuana contains THC-COOH, which is a by-product of THC and the main metabolite that urinalysis drug tests search for. However, this substance can remain in an individual’s fat cells for weeks. Consequently, THC is known for remaining in the body longer than most other substances.

THC metabolites, or cannabinoids, can remain in an individual’s bloodstream for 2-7 days, depending on the frequency of use.

Despite the uncertainty of hair follicle testing for THC, this method of testing has been found to show traces of THC for up to 90 days since last use. THC is passed to hair follicles via small blood vessels. Because hair is known to grow approximately 0.5 inches per month, a 1.5-inch segment of hair is taken in order to determine traces of THC from up to 3 months ago.

Larger doses of marijuana will cause this substance to remain in your system for a longer period of time. However, determining dosages can be difficult because the percentage of THC in marijuana varies.

Duration and Frequency of Use

Frequent or long-term users of marijuana will have THC in their system for a longer period of time than light users.

People with higher metabolisms can digest food and nutrients faster than those with a slower metabolism. In the same way, individuals with high metabolisms break down cannabinoids from marijuana faster. This creates a shorter detection period.

While marijuana is known for being medicinal and all-natural in nature, this substance can be addictive. Because of the euphoric effects marijuana produces, individuals prone to developing substance use disorders can become addicted. While marijuana addiction may not appear severe, this addiction can interfere with one’s finances, social life, and career. If you or a loved one are experiencing an addiction to marijuana, treatment is available.

If you would like to begin a new way of life, call an addiction specialist at Carolina Center for Recovery today to learn about our treatment programs. Our informed, supportive, and professional staff can help you to overcome marijuana addiction, as well as provide you with the tools you need to maintain lifelong sobriety.