Chat with us, powered by LiveChat Angel Dust Side Effects and Dangers - Carolina Center for Recovery
Popular Post Recent Posts

What is Angel Dust?

Home » Blogs » What is Angel Dust? 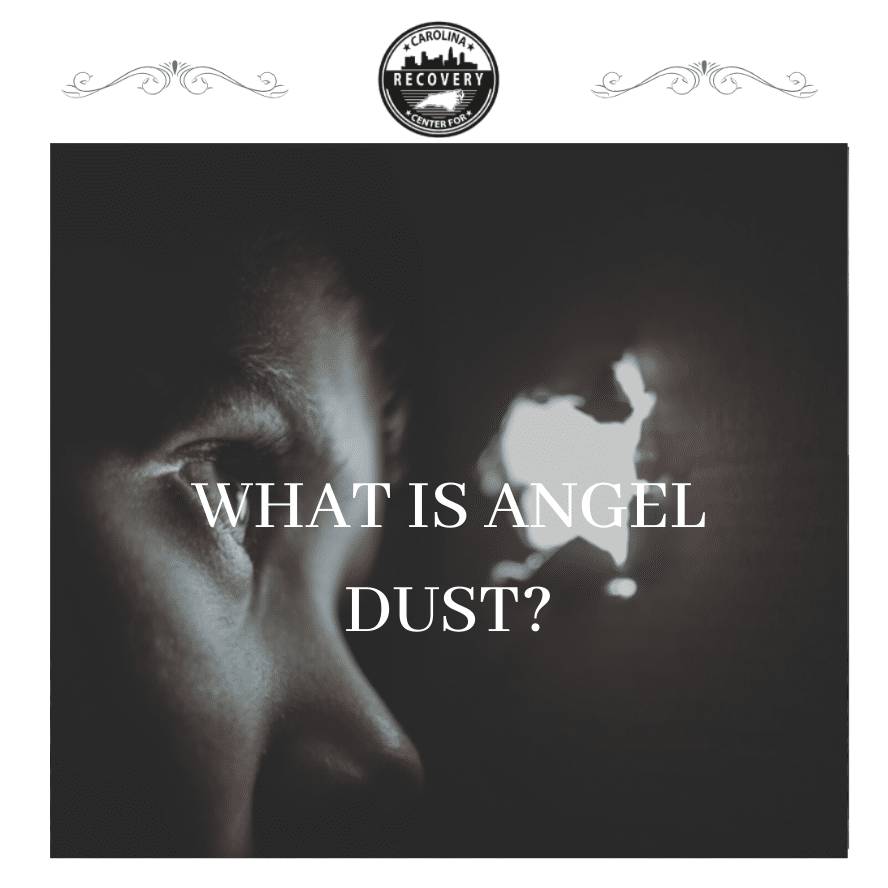 Understanding the Dangers and Side Effects of Angel Dust

Angel dust is a popular street name for phencyclidine (PCP). PCP is known as an extremely dangerous drug that leads to hallucinations and dissociative states. Although many people experience “bad trips” while high on angel dust, the drug is still widely abused today.

Angel dust is a Schedule II controlled substance because it poses a high risk for abuse and addiction. Despite the illegal status, PCP is manufactured in clandestine labs and contains a number of unknown additives. Furthermore, it poses serious health risks to the mind and body of people who abuse it.

In order to better understand what angel dust is, let’s take a deeper look into how it affects the body and what risks are associated with abusing it.

What is Angel Dust/Phencyclidine (PCP)?

Angel dust (PCP) is a dissociative drug that distorts one’s sense of sight, smell, sound, self, and surroundings. Although the drug was originally developed in the 1950s as an anesthetic for medical purposes only, human medical use was quickly discontinued in 1979 due to serious neurotoxic side effects that began to occur.

Still, PCP is sold under the name of “angel dust” on the streets and comes in a white, crystalline powder form. However, as an illicit drug, manufacturers often add a number of additives and contaminants that can cause the color, appearance, and potency of the drug to vary.

Depending on how pure the drug is, it may range anywhere from white to light or dark brown in color. People might smoke or inject PCP, while others will snort or swallow them in tablet form. PCP in its purest form dissolves easily in alcohol, water, and other beverages and it has a distinct, bitter taste.

Other names for PCP include:

PCP is considered a noncompetitive NMDA (N-methyl-D-aspartate) receptor antagonist as well as a glutamate receptor antagonist. These receptors are responsible for mediating neural communication between synapses in the brain, ultimately having control over memory formulation, learning, and mood regulation.[2] As a result, the drug directly affects the reuptake of serotonin, norepinephrine, and dopamine, leading to a variety of emotional and physical side effects.

How Does Angel Dust Affect the Body?

Angel dust is considered an extremely dangerous drug because it produces intense and worrisome side effects. For example, angel dust affects the body in the following ways:

If someone is displaying these signs and symptoms, he or she might be under the influence of PCP.

This drug affects bodily functions in a variety of different ways. For example, in low doses, people might experience an increase in breathing rate, heart rate, and blood pressure along with profuse sweating. On the other hand, high doses of PCP might produce more serious side effects, such as:

When people experience hallucinations, they refer to this as a “trip.” However, angel dust is known to cause scary hallucinations and delusions, causing many people to experience “bad trips.”

Researchers looking at people who were intoxicated with PCP found that more than 50% of adults presented worrisome symptoms including violent behaviors, increased heartbeat, high blood pressure, and extreme sedation.[3]

The side effects one feels is highly dependent on what dose they take. When taken in low doses of 2-5mg, PCP intoxication may mimic the effects of alcohol. However, at a moderate dose of 5-10mg, the side effects of angel dust can resemble the symptoms and behaviors associated with people who have schizophrenia.

Higher doses, such as those consisting of more than 25mg, are known to lead to hyperthermia, convulsions, coma, or death.[3] People who have knowingly consumed more than 25mg of angel dust should seek medical advice immediately.

What are the Dangers of Abusing Angel Dust?

As with all recreational and prescription drugs of abuse, there are many dangers associated with angel dust abuse. Users of PCP may experience sedative-life effects, so there is a significant risk for overdose when taken in high doses (25mg+).

Similarly, when combined with other depressants like alcohol, opioids, or benzodiazepines, the side effects of these drugs are exacerbated and place individuals at an even higher risk of accidental overdose.

Overdose isn’t the only danger of PCP abuse. In fact, many people who are brought into the emergency room because of an overdose on this drug become hostile or violent when confronted with strangers. As a result, it is sometimes difficult to keep people calm and relaxed while they are under the influence of PCP because some people experience frightening hallucinations and delusions.

Unfortunately, some patients who are recovering from angel dust will experience bizarre behaviors, depression, and psychosis symptoms that affect their mental health for several weeks – even after stopping use of the drug.

PCP is also thought to be a direct cardiac irritant because of how it affects the central nervous system in such unique ways. For instance, PCP abuse comes with the risk of induced arrhythmias, vasospasms, hyperreflexia, and cardiopulmonary arrest.[3]

People who abuse PCP for extended periods of time are at risk for developing hepatitis, HIV, and other diseases that are associated with shared needles and drug addiction.

Lastly, angel dust is known to produce long term physiological effects, such as memory loss, cognitive decline, depression, and weight loss. Moreover, some people may develop a condition known as hallucinogen persisting perception disorder (HPPD) – a condition that causes flashbacks and hallucinations for an extended period of time, even after stopping substance abuse.

As a result, if you or a loved one has been abusing PCP, it is vital that you seek help as soon as possible.

Angel dust is still abused across the country despite being widely known for its negative psychological side effects. According to the Justice Department, approximately 6 million U.S. residents aged 12 and older have used angel dust at least once in their lives.

While PCP use is fairly uncommon among adults, it is a particular concern among high school students and young adults. For example, more than 3% of high school seniors are estimated to have used PCP at least once in their lifetime.[1]

Can You Get Addicted to Angel Dust?

Angel dust is an addictive drug. People who abuse it over an extended period of time will likely develop a tolerance. As a result, they have to use increasing amounts of the drug in order to achieve their desired high.

Eventually, the development of tolerance almost always comes physical and psychological dependence. When the body is dependent on a substance, it takes time to adjust to not having the substance. This adjustment period is when withdrawal symptoms occur.

As people take more and more of the drug, the associated risks become more likely. Not only that but once the body is dependent on PCP, it experiences withdrawal symptoms when not using the drug.[4] While withdrawing from angel dust, people experience the following symptoms:

Although PCP withdrawal is typically not life-threatening, it can be difficult to overcome on your own. Instead, help from a drug detox is the best option for anyone suffering from addiction.

It’s scary to think about getting sober. We know that it isn’t easy. We also know that asking for help can be the hardest part. If you or a loved one has been abusing PCP and can’t seem to stop for good and for all, contact us today.

As a family-owned and operated drug and alcohol treatment center, we’re dedicated to providing each patient and their families with the undivided attention and care that they deserve.

So don’t wait any longer – pick up the phone and call today to learn more about our North Carolina addiction treatment programs.